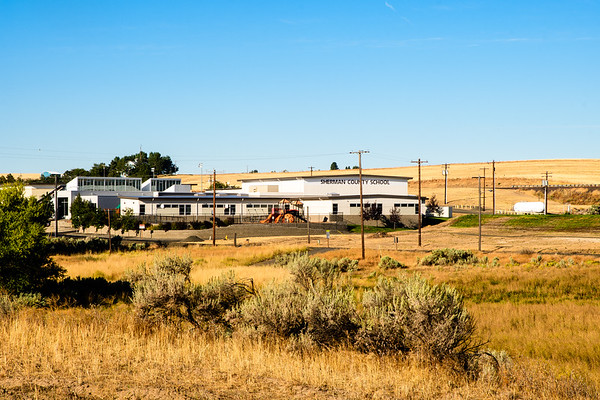 The Sherman Union High School Board became the governing body for the new district.  The five board members are nominated by zone and elected at large. The board was served administratively by a superintendent, deputy clerk and part-time confidential secretary. The district office was located in the former Rufus Elementary School.  The District operated one K-4 school, two K-8 elementary schools, and a high school.  Rufus Grade School was a K-4 facility.  North Sherman (formerly Wasco Grade School) was a K-8 facility located in Wasco which served approximately 150 students.  South Sherman Elementary school was also a K-8 school which served approximately 130 students and its location was in Grass Valley.

In 1996, Rufus Grade School consolidated with North Sherman Elementary.  The two elementary schools—South Sherman and North Sherman—were separated by 18 miles and were approximately 35 miles from the nearest elementary outside of the district. Both of these schools fed into Sherman High located mid-way between the two elementary schools in the town of Moro.  Sherman High had 135 students in grades 9-12. Each of these schools were administered by a building principal. Sherman High is 45 miles from the nearest high school. The closest city of any size is The Dalles located in Wasco County.  Sherman County School District is the only school district in the county. There are no private schools in Sherman County and very few youngsters are home schooled.

In 1998, the district office was moved from Rufus Grade School to the old Moro Grade School.

In 2004, the district office moved from the old Moro Grade School to the North Sherman Grade School in Wasco.

In 2009, a decision was made to close the North Sherman campus, located in Wasco, and consolidate to one elementary building with grades K-6 in Grass Valley now known as Sherman Elementary.   The district office was also moved from Wasco to Grass Valley.

In 2012, the district office was moved to Sherman Jr.-Sr. High School.

In 2016 an Elementary structure was built onto the existing Jr.-Sr, High School and the Grass Valley school was closed. This gives the county a single campus pre-K - 12th grade. As of July 1st, 2016 we became "Sherman County School". The District office is also located in the building.

Sherman County School District is considered both rural and remote. Sherman County School District is one of six school districts in three counties served by North Central ESD. The ESD provides the necessary staff for all the district's special education and counseling needs. The ESD also provides funding which makes it possible for the district to offer music, foreign language, and to stay current with the latest technology. North Central ESD also provides staff to assist in the areas of curriculum development, library services, print services, and technology.

Sherman County's borders are defined by water. The semi-arid 8341 square miles are bordered on the north by the mighty Columbia River, on the west by the Deschutes River, on the east by the John Day River, and on the south by Buck Hollow Creek.  Sherman County was created in 1889 out of the vast domain of Wasco County and is now home to modern day stockmen and farmers. Sherman County has evolved into a major producer of soft white wheat and barley. These grains are shipped throughout the Pacific Rim countries.

The once bustling small communities of Wasco, Grass Valley, Kent, and Moro have lost much of their commercial base to regional centers such as The Dalles, Madras, Portland, and Yakima. The town of Rufus and crossroads of Biggs are located on the I-84 corridor and serve the transportation and tourist industries. Although economic centers drain dollars from Sherman County, the small towns offer an alternative to a hectic urban environment. The tranquility of rural communities - with safe streets, affordable housing, good schools and great recreation - is a realistic alternative many families are now considering.